Now that Ancient has been in the map pool for nearly 9 months, we wanted to look at which maps are the most popular in CSGO! In this article, we will show you some interesting infographics which display the popularity of each map whilst also providing some context to help us evaluate these results! All of the data below is taken from MM and Faceit matches over the past 6 months, from September 2021 to March 2022!

Most Popular Maps in Matchmaking

Over the past few years, the remove mirage fan club has grown, with community figures, pro players, and fans demanding its removal. Yet, it is the most popular map in matchmaking by a large margin!  This was also the case the last time we looked into map popularity, just before Ancient was brought in last year! Whilst pro players and esports fans might find Mirage boring, it is the most played map by a significant margin, therefore I doubt we will see it removed anytime soon.

Inferno and Nuke have both seen large increases since last year, whereas Ancient is barely above Train even with it being outside the active map pool. Vertigo and Ancient fans need to be worried about Cache, as it is in a prime position to be the next map introduced into the map pool!

These stats do not tell the full story, as the Riptide operation contained multiple missions, influencing which modes users played. So we need to look at the Short vs Long match popularity!

During Operation Riptide there were 11 missions where players had to play short matches to gain stars, however, there were 0 long match missions. I think this will have had a significant impact on the number of short matches played, and in a few months, we will see significantly fewer short matches played. I think this will have the biggest impact on maps like Ancient and Vertigo, as they both had large differences between their short and long match %, whereas the other maps saw little change!

Most Popular Maps in Faceit

Mirage strikes again with a first-place finish! Faceit didn't have enough Cache games to be included, so all of the percentages will see a natural bump up because of this! Inferno, Overpass, and Vertigo all see increases in comparison to MM, however, Dust 2 takes a nosedive in popularity % wise! Faceit only has long matches enabled, which is interesting as Train and Ancient are much closer together here than they were in MM! 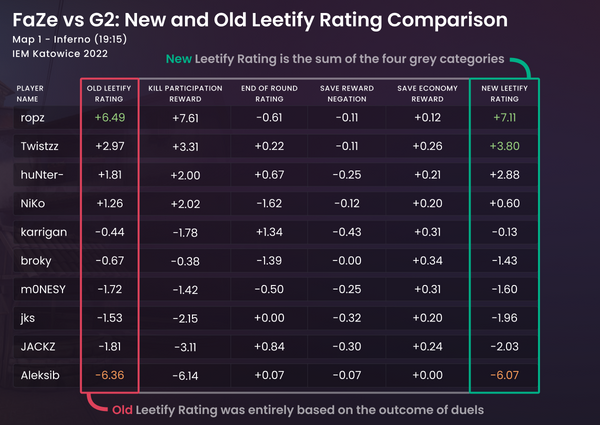 We made a few tweaks and additions to the Leetify Rating formula to better measure everyone's impact.

The major is the time of the year where each player’s impact matters most in CS:GO, and a single round can make the difference between going out in