We set out to answer two questions;
1) How many people make it to level 10 on FACEIT?
2) How many matches does it take the average player to progress through each FACEIT rank?

In order to answer these questions, we set a few filtering parameters. We had to be able to find the first match played by a FACEIT user, if we were unable to find it most likely because they had been on the platform since before 2016 (when users use to start at level 4 or 5) we excluded them from the pool. We had to find enough random users to fulfill the requirements for a simple random study in order to achieve statistical significance. Lastly, we excluded users that were severe outliers in terms of matches played.

A limitation to mention, there have been multiple elo changes on the FACEIT platform that are hard to account for.  (Are there any other limitations?)

Ultimately, we were able to form a pool of 10,000 unique FACEIT users whom we found their first match played at the starting level of 3. The chart below displays the progression of these 10,000 users from the starting point (100%) of level 3 (L#) all the way to how many of the 10,000 eventually reached L10 at some point (22%). Additionally, we found that on average, if a user reached L4 they continually advanced through each level until reaching L10 at a clip of 86.23%. On another note, there is a major drop from L3 to L4, this is primarily due to two factors. First, a healthy amount of these users regressed L2/L1 or went back and forth in L3. Second, a portion of these users fell inactive.

Afterwards, we used these users to calculate the amount of played matches needed in order to hit a certain FACEIT level on average. The graph below displays, most importantly, the median matches needed alongside 2 additional percentiles. The top 25% and bottom 25% of these players. These numbers are calculated from the starting point of L3.

In conclusion, for this sample pool of users we were able to find that 22% or approximately 2200 reached FACEIT L10 and the majority of them were able to reach L10 with on average 575 matches played. Interestingly, we also analyzed over 2 million unique FACEIT players to determine the current rank distribution and we found that 3.55% of these players were FACEIT L10. A percentage that is higher than the amount of L9s, L8s, and L7s. In comparison to Valve matchmaking, there are a lot more L10s than Global Elites in terms of percentage of the player base. 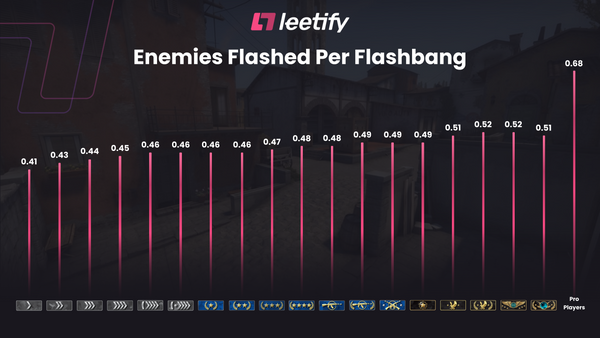 We analysed over 3 Million unique CS:GO Matches to find which Matchmaking and Faceit ranks are the best at using their flashbangs on enemies and teammates. Check out the graphs below to see where your rank places! 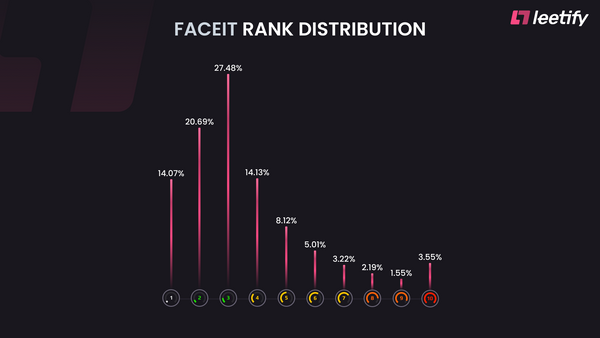 We analyzed over 2 million unique CS:GO FACEIT players to produce an updated view of the current level distribution across FACEIT matchmaking services. The bar chart, below from left to right, displays the rank distribution from lowest to highest.